Create an Account - Increase your productivity, customize your experience, and engage in information you care about.

SUMMER READING IS ALL ABOUT TAILS & TALES! 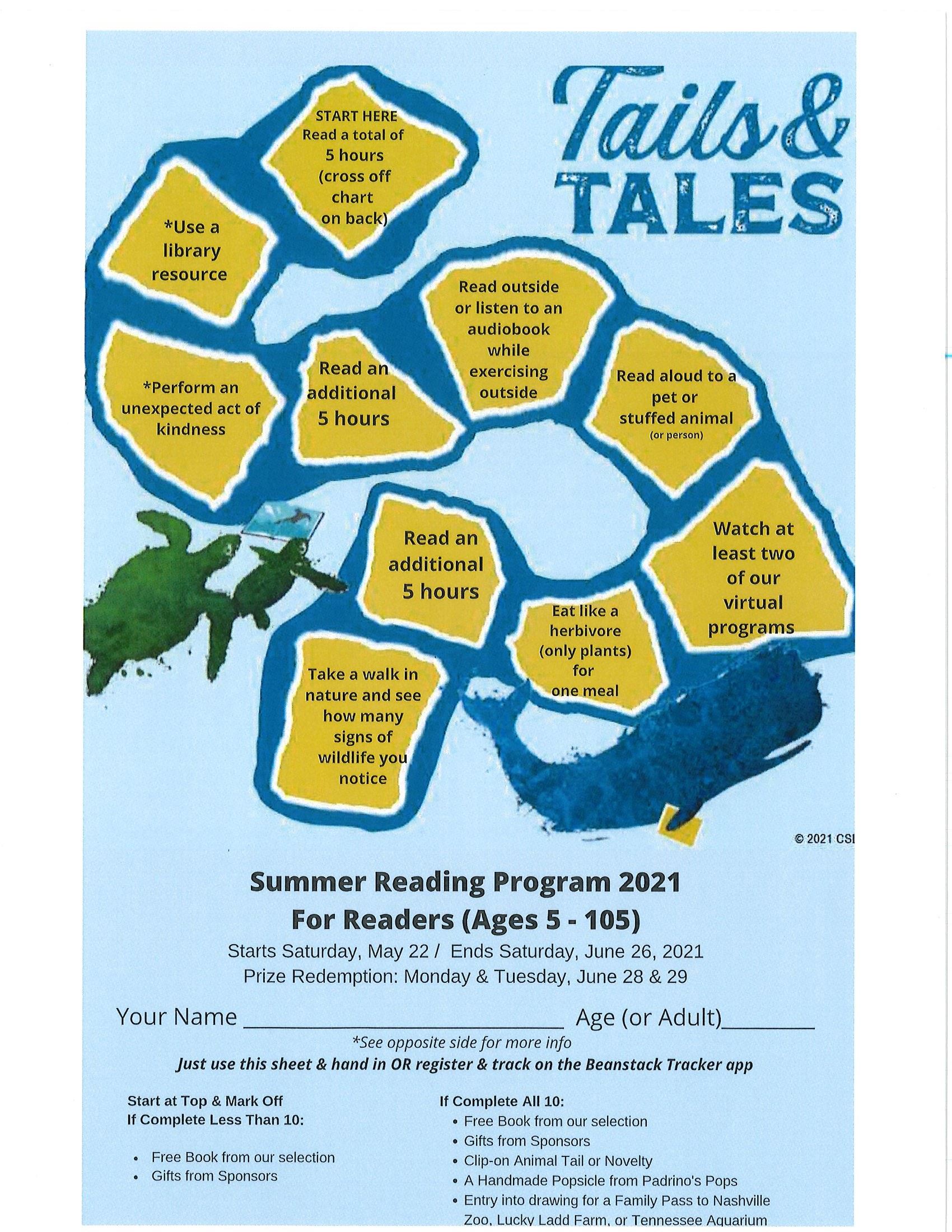 If Beanstack just isn't your thing, then click on, print out and use this sheet below to mark off your progress and hand it in on one of the prize redemption days. 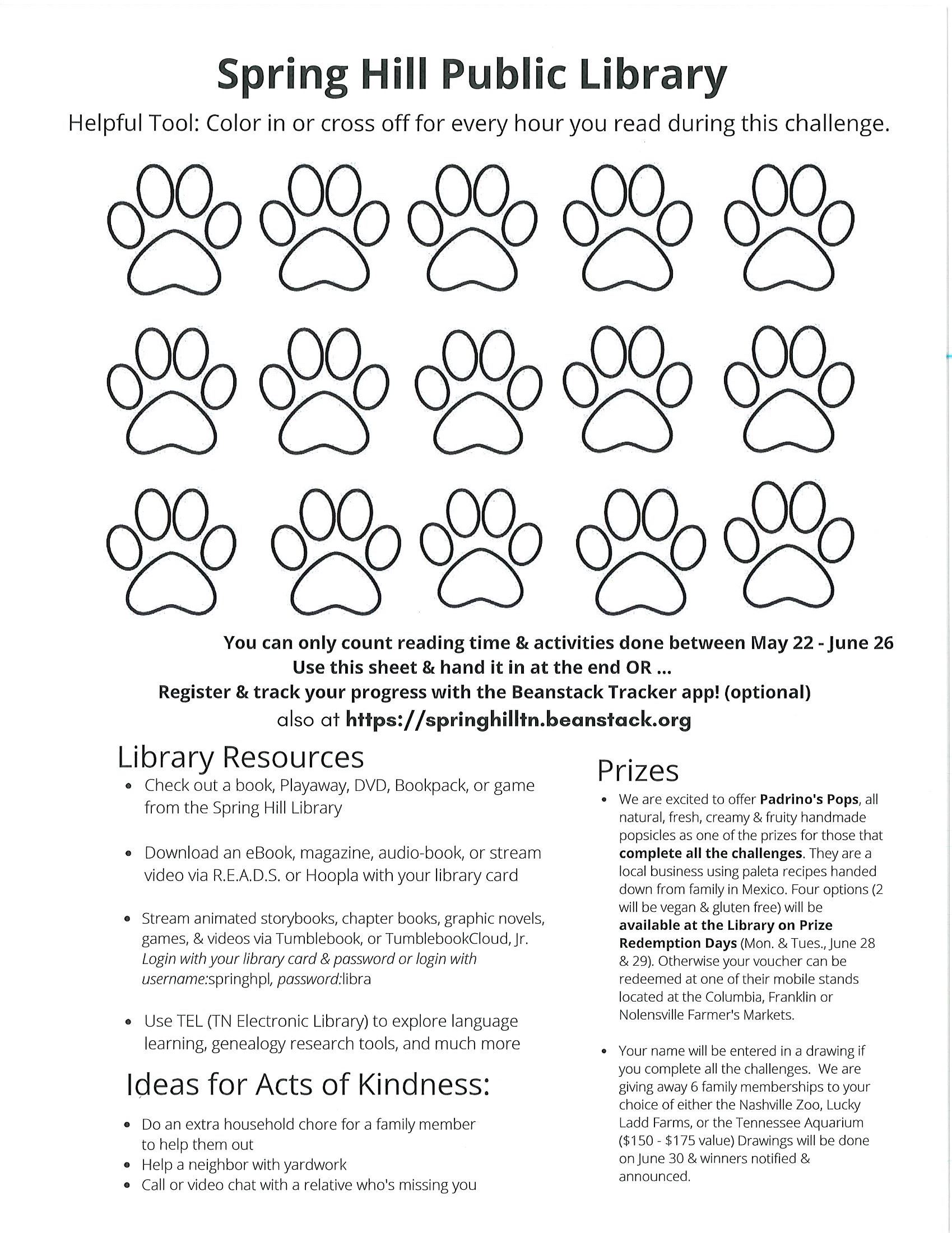 Exhibition opening 8/18/20 showcases events leading up to Tennessee’s ratification of the 19th Amendment to the U.S. Constitution

SPRING HILL, TN – 8/18/20 – Spring Hill Public Library presents To Make Our Voices Heard: Tennessee Women’s Fight for the Vote, a new traveling exhibition, on display 8/18/20 through 10/30/20.  The exhibition, created in partnership with the Tennessee State Museum and the Tennessee State Library and Archives, explores the history of the woman’s suffrage movement, Tennessee’s dramatic vote to ratify the 19th Amendment in 1920, and the years that followed.

“We are honored to be hosting this exhibit and eager to share it with all of the citizens in Spring Hill, and with all of our library patrons beyond Spring Hill. My hope is that it will inspire women and men to exercise their right to vote in November and again for the city election in April, setting an example for our children about the importance of civic engagement,” said Library Director Dana Juriew.

The exhibition is constructed of multiple dynamic panels, offering guests a touch-free experience of archival images, engaging stories and introductions to the leaders of the fight for and against the cause of woman’s suffrage. The stories begin by detailing the early challenges of racial and gender discrimination and continuing to the organization of African American and white women’s associations to encourage political engagement.

Visitors will also learn about Febb Burn of McMinn County, whose letter to her son, Harry T. Burn, resulted in a last-minute vote that helped change women’s history in the United States forever.

The exhibit includes a Tennessee map, highlighting suffragist activities across the state.

“Tennessee’s role in becoming the 36th and final state to ratify the 19th Amendment not only solidified women’s right to vote but propelled women across the country to opportunities and futures they never thought possible,” said Chuck Sherrill, State Librarian and Archivist with the Tennessee State Library & Archives. “The hope of the committee is this centennial celebration will do the same all across our state.”

In coordination with this traveling exhibit, the Tennessee State Museum in Nashville will soon open Ratified! Tennessee Women and the Right to Vote, an extensive 8,000 square foot exhibition exploring the Women’s Suffrage movement in Tennessee through archival images and documents, artifacts, films, interactive elements, and programming.

An online component of the exhibition, Ratified! Statewide! highlighting the suffrage movement in every Tennessee county is available now at tnmuseum.org.

“As we commemorate the historic vote that took place at Tennessee’s State Capitol in August of 1920, we want to honor those individuals who played key roles in the journey to gain voting rights for women,” said Ashley Howell, Executive Director of the Tennessee State Museum.  “We are thrilled to have the opportunity to share these stories across the state.”

The Spring Hill Library is a community resource, offering a gathering place to meet and share ideas, while fostering a lifelong appreciation of reading and learning inside and outside of the library’s walls.

The Tennessee State Museum, on the corner of Rosa L Parks Blvd. and Jefferson Street at Bicentennial Capitol Mall State Park, is home to 13,000 years of Tennessee art and history. Through six permanent exhibitions titled Natural History, First Peoples, Forging a Nation, The Civil War and Reconstruction, Change and Challenge and Tennessee Transforms, the Museum takes visitors on a journey – through artifacts, films, interactive displays, events, and educational programming – from the state’s geological beginnings to the present day. Additional temporary exhibitions explore significant periods and individuals in history, along with art and cultural movements. Additional temporary exhibitions explore Tennessee history including the current exhibition, Ratified! Tennessee Women and the Right to Vote. For more information on exhibitions, events and digital programming, please visit tnmuseum.org.

About Tennessee State Library and Archives

The Tennessee State Library and Archives is located next to the State Capitol building in Nashville. Established in 1854, it houses a vast collection of books, documents, maps and photographs about the State of Tennessee. These materials are open to the public for research use, and staff are on hand to assist researchers. Suffrage-related collections include legislative records, oral histories, historical newspapers and manuscript collections. For more information about the collections of the Library & Archives and how to access them, please visit www.sos.tn.gov/tsla

The Official Committee of the State of Tennessee Woman Suffrage Centennial